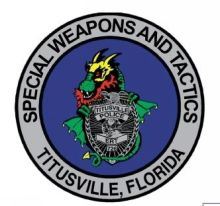 The Special Weapons and Tactics Unit, (SWAT), was initially formed in 1978. Since it’s inception, the team has had only one purpose, to save lives!

This highly trained and specially equipped group of officers is prepared to respond to high stress and critical situations. These incidents include:

Whether apprehending a dangerous criminal or conducting search and rescue operations for a missing child, team members are on call to respond to incidents 24 hours a day.

Officers assigned to the team are required to pass through a rigorous testing process which can last up to 24 hours. Officers must complete intensive physical challenges, shooting judgment courses, written tests, and an interview process. Members of the Titusville Fire and Emergency Services are currently serving on the SWAT team as "Medics" on the team call-outs.

In 1989, Officer Stephen F. House was killed while conducting a SWAT operation. The Dragon in the Team’s symbol is based on a tattoo Steve had. His legacy lives on, and his name is well known and respected in the tactical community to this day. For his ultimate sacrifice, Officer House he was posthumously awarded the Medal of Honor.