Laurilee Thompson is a fifth generation Floridian who grew up on the Indian River Lagoon. Her family owns and operates the popular Dixie Crossroads Seafood Restaurant in Titusville, FL, an establishment that depends exclusively on a healthy estuary. The Indian River Lagoon is a nursery ground for one of Dixie’s premier wild ocean shrimp, Cape Canaveral Golden Brown Shrimp, as well as their source for fresh Indian River Mullet.

I always knew our waters were incredible but this kayak trip was just astonishing! We launched our boats late yesterday afternoon in Haulover Canal, which connects the Indian River lagoon to Mosquito Lagoon. We drifted around a bit before dark, relishing the antics of manatees that were rolling around right next to our kayaks. To have a 2,000 pound animal that’s as big as your kayak swim gently alongside is truly a remarkable experience! They even pushed our boats around with their noses. A short time after sunset, we slowly began to see the swirls from our paddles produce a glow in the water that was caused by bioluminescence - living lights in the water.

In some places in the ocean and estuaries, bioluminescent creatures are so abundant that any disturbance such as a boat, a fish, or even a hand passing through the water can produce a shimmering light show. In bioluminescence, electrons are excited by a very efficient chemical reaction that generates no heat at all, hence the name "cold light". Bioluminescent creatures are beautiful, fascinating, and critical to the very existence of most marine life. They are also little known and little appreciated because so few people have the opportunity to see them with their own eyes.

As it got dark we discovered we could see almost everything in the water from schools of darting fish to manatees and porpoises. Even the flow of water over the sea grass generated a ghostly radiance. Every movement produced a beautiful blue-green light. We slowly paddled from the Indian River to Mosquito Lagoon, fascinated with the brilliant wave patterns that formed as our kayaks sliced through the water.

There were ten times more mullet in Mosquito Lagoon than there were in the Indian River where we started. It was unbelievable! As soon as we turned north out of Haulover Canal, schools of mullet exploded all around the kayaks - it looked like popcorn on the surface and fireworks down below. Mullet flew through the air, colliding with the boats, leaping over our bows and on several occasions smacking right into the paddlers themselves. The calm black water filled with large green splashes where fish hurtled from the surface, then crashed back in. The contrast between the pitch-black darkness and the emerald green explosions from airborne mullet, the brilliant meteoric streaks of mullet that chose to swim instead of fly, the mirror-still water filled with reflections of the stars, the profusion of multi-colored light-sticks dangling from exuberant paddlers, the persistent distant flashes of lightning, low rumbling thunder and the taste and smell of salt-laden air was a marvelous cornucopia for all five human senses. It was a pleasure just to sit still and listen to the shrieks of joy and laughter coming from the delighted kayakers - none, of course, had ever experienced anything like that this.

Peering down into dark near-shore waters was like looking into a fairy land. Even individual strands of seagrass shimmered along with the creatures and jellyfish that drifted about. Tiny fluorescent organisms scattered through the grass like flickering stars. Touching a floating mass of dead seaweed sent jagged fingers of blue-green light radiating across its surface. When I dragged my hand through the water and brought it out, my skin was covered with green flashing glitter. Water droplets that fell to my pants glowed in my lap and spilled down my legs. An iridescent stingray swam right by my kayak just under the surface of the water. I could tell it was a stingray because it had the perfect diamond shape of a sting ray, tail and all. Ghostlike, it slowly flapped through the water - amazing!

A chorus of screech owls accompanied us on the quiet paddle back. Bottle-nosed dolphins streaked beneath the kayaks and burst from the water showering brilliant florescence. Blue crabs scuttled by, swimming sideways in the current. They were really bizarre looking since every moving appendage was glowing. The crabs reminded me of Fizzies, a popular bubbling drink concoction from my childhood. Fallen pines smoldered below the surface as the water flowed over them, creating perfectly outlined spectral tree images that shimmered eerily deep under the water. Rocketing overhead, an enormous meteor split the night sky with its long glittering tail - it seemed to last forever. You should have heard the gasps of astonishment and wonder from the paddlers.

When I was growing up, I fished for mullet at night in the Indian River and enjoyed the bioluminescence on every summer evening. But floating in a kayak right on top of the water was a thousand times better than screaming down the shoreline in a powerboat. This truly was a phenomenal experience. 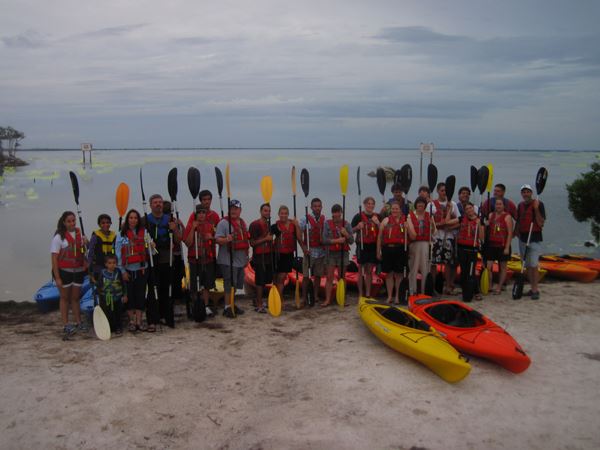